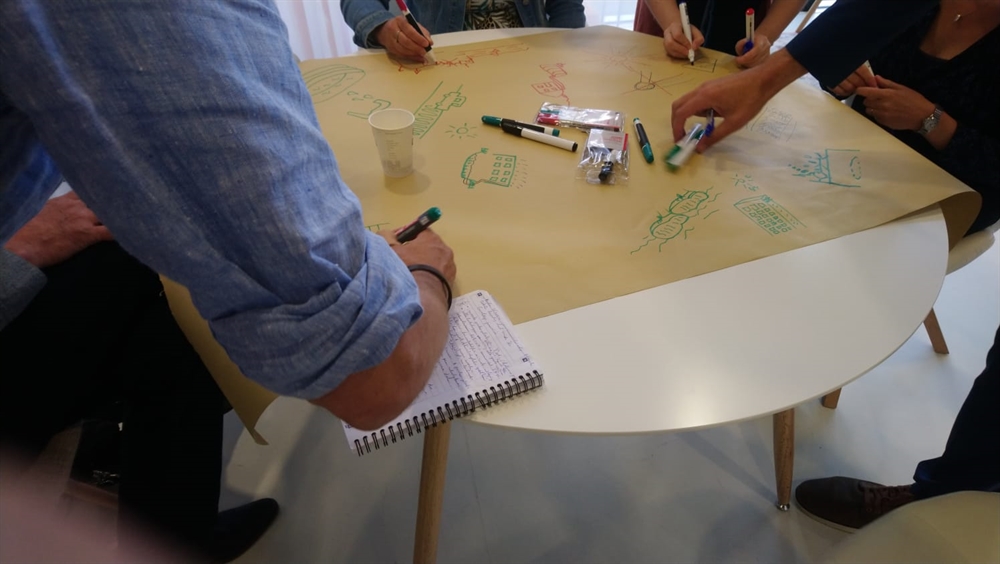 For what purpose have you used the diagrams?

The province of Utrecht is using the NAS diagrams for its internal and regional dialogues:

Why have you opted for using the diagrams?

The diagrams help to make the dialogues interactive. The interactive sessions are intended to get answers to the following questions:

With the NAS adaptation tool, we did not use the climate themes – drought, waterlogging, heat, and urban flooding – as our points of departure. Instead, we are taking our departure from the sectors, in order to have every party involved consider what opportunities and bottlenecks climate change is generating in terms of their own policy, field of knowledge, or project.

In what way have you used the diagrams?

We are using the conceptual diagrams as our starting points for the sector-based dialogues. In each case, they are literally on the table. In some dialogues, they are inspiring the participants to come up with a host of opportunities and bottlenecks themselves. In other dialogues, the participants will look at all the conceptual diagrams, whereupon they use the step-by-step form (pdf, 162 kB) and the risk matrix (pdf, 843 kB) to determine which effects have priority and which are less urgent.

What exactly is your approach?

After a brief introduction on climate change and adaptation, we enter into a dialogue.

As a minimum, the result of the sessions is that the participants become aware of the opportunities and threats that climate change entails for their own field of work. In some sessions, the participants collectively determine which opportunities and threats have priority, and which are less urgent. In conclusion, we ask who would be willing to be a climate adaptation ambassador, and we discuss the subsequent steps.

How do you determine which diagram circles are more, or less, relevant for your team?

The dialogue participants together determine which circles are relevant, i.e., where the opportunities and bottlenecks lie. Climate adaptation experts then enter into a dialogue with the representatives of policy fields, sectors, and projects involved.

What is the result?

In the dialogues, the conceptual diagrams can produce various results:

How will you be using the conceptual diagrams next?

As yet we have been using the NAS diagrams per sector, but we also intend to use them for comprehensive risk dialogues. Each conceptual diagram will then cover multiple sectors, such as living, biodiversity, and health. Thus, the opportunities and bottlenecks between various sectors become manifest. This will enable us to define even more accurately which opportunities and risks take priority and which are important to provincial policy. Wherever possible, we will also be approaching potential solutions in an integrated manner.

Climate portal of the province of Utrecht