What is Game Day?

Game Day is a programme that can be followed as a team. It involves a playful approach to reflecting on ways to cope with climate change. The day’s schedule comprises two sessions. During the first session, the participants receive an introduction regarding the Minions of Disruption board game, whereupon they divide into small groups to play the game. During the second session, the participants share experience and specify the next steps they will be taking. Game Day challenges the participants to look at climate adaptation from a different perspective and thus to break up existing expectations. The Day of Adaptation foundation has developed Game Day and the board game. During a Game Day, their facilitators will guide you through the entire programme. 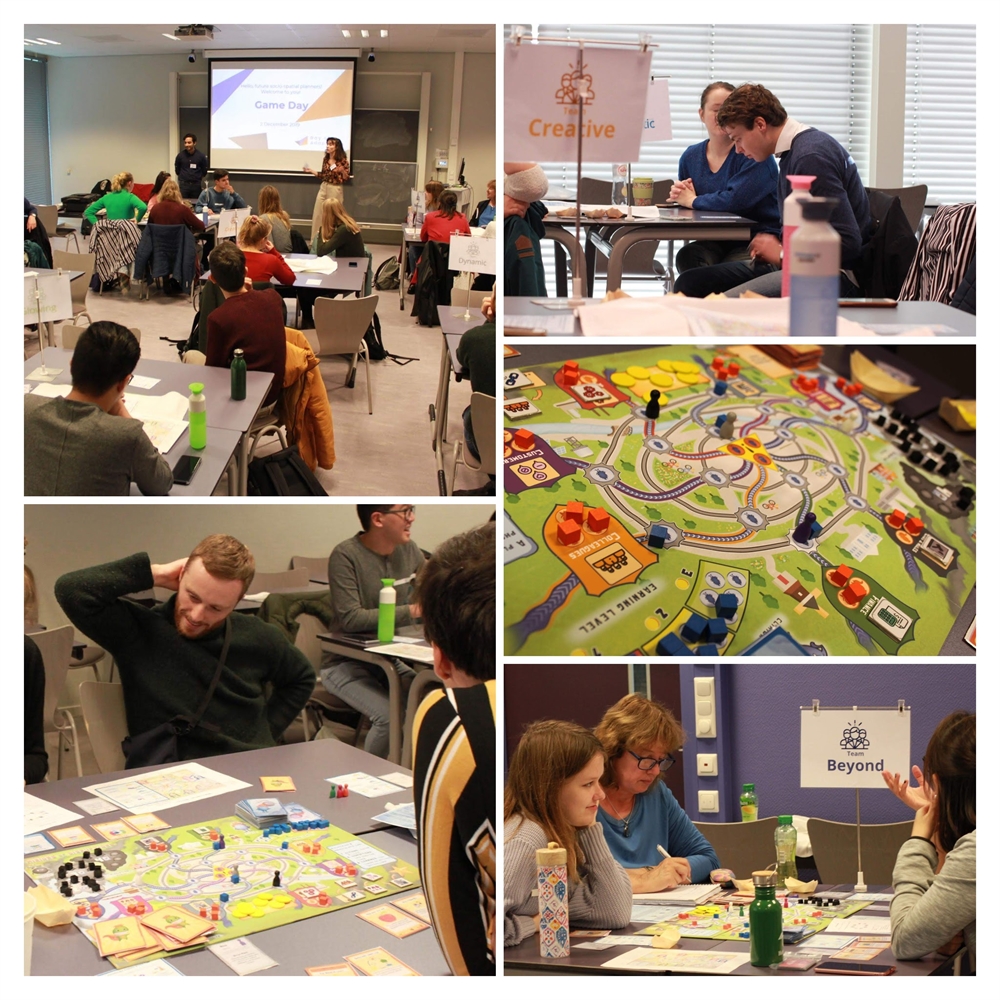 Why a Game Day for Groningen students?

Groningen University has organised this Game Day to have its Spatial Planning students become acquainted with the various aspects of climate adaptation. The Day of Adaptation foundation has tailored the programme to the students, with practical examples relevant to their field of study. For example, they have explored how climate change can impact our infrastructure and our basic needs. The day served the additional purpose of team building.

The students played the board game in randomly composed groups. Within each group, each student was assigned a role, such as a trainee, project manager or CEO within a fictional organisation. Each role involved specific skills. This enabled the students to experience the dynamics within a working environment. The goal set for each group was collectively to beat climate change. In addition, the groups played one another for the highest score. After the game, the students entered into a discussion: how do the elements of the board game feature in their daily lives, their studies, and their future jobs?

What results has Game Day produced?

The game and the discussions have provided the students with several insights. For example, the discussion revealed that many students are unaware of the knock-on effect of climate change. The game has demonstrated that combating climate change and its impact involves a race against the clock. The longer we wait, the hastier the decisions we will need to take. This made the students realise the need for the timely search for multi-disciplinary and innovative solutions. The students indicated that they consider climate change an important issue, but many of them had the feeling that future employers would not appreciate a suggestion to take action to combat the impact of climate change.

Ms Ina Horlings, professor of Socio-spatial Planning, about Game Day: ‘I have looked for innovative ways to make students aware of climate change, and to provide them with insights on the issue. The Game Day offered the perfect solution: everyone played Minions of Disruption for an afternoon, participating with full commitment. After the game, we discussed what we can do, as individuals and as groups, to adapt to climate change. The fun game element boosted the dynamics of the activity and produced new insights. I highly recommend this team building and experiential learning activity to leaders who wish to inspire their teams.’

Lessons to be learned from Game Day