New calculation tool for climate-proof and green construction in Eindhoven

Eindhoven is taking noticeable steps towards climate-proofing and greening the city. Such measures enhance the liveability of cities. The municipality has developed a new policy for new housing developments. Each construction project must now be capable of storing a certain number of cubic metres of water. A simple calculation tool helps construction companies to calculate the mandatory water storage capacity. The emphasis in this respect is on greening the built-up environment, as increased volumes of greenery concurrently make a significant contribution towards tackling the other climate taskings, viz. heat stress and dehydration. 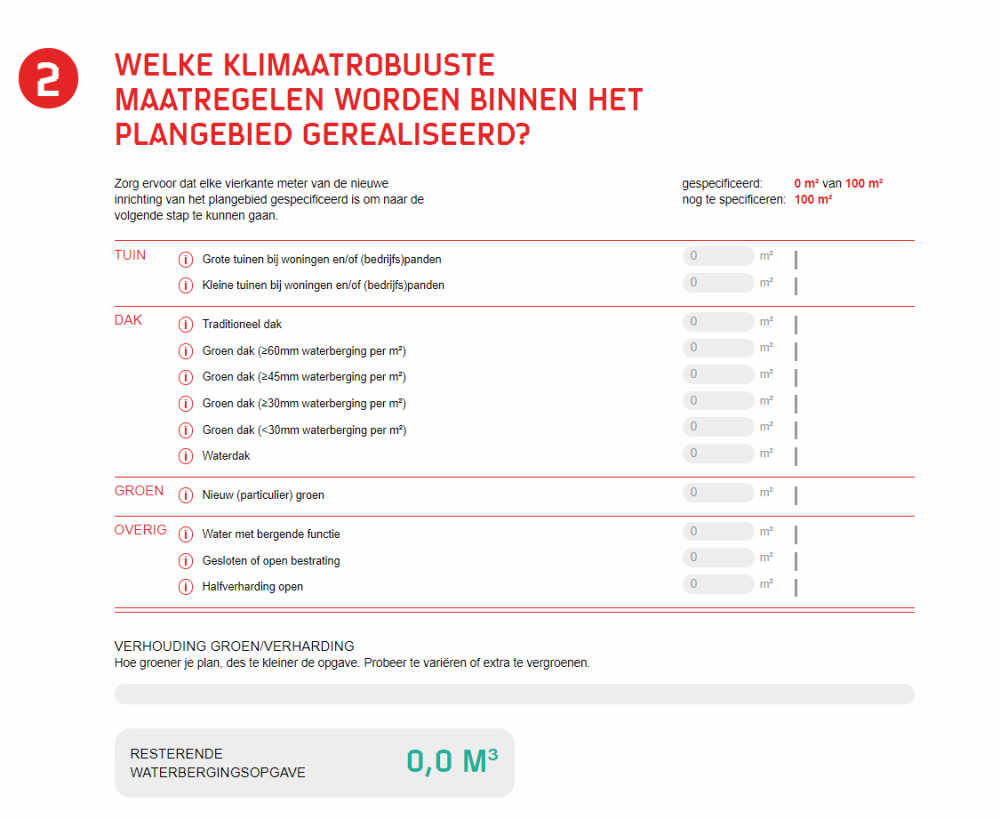 Frank van Ekert, urban water consultant for the municipality of Eindhoven, reports enthusiastically on the city’s climate ambitions. ‘Eindhoven is aiming for maximum climate resilience in its actions. Because the weather is increasingly extreme, we need to look beyond the public space. We also need private premises for storing water.’ For that reason, the municipality of Eindhoven is going one step further by requiring each new housing development to realise water storage. Van Ekert: ‘If you are building something new, do it right straight away. This also keeps the investment costs within budget.’

The new municipal policy not only covers water, it also extends to greenery. ‘When elaborating the tool, we thought: what exactly do we want for our city?’ Van Ekert states. ‘Many developers opt for subsoil water storage using crates. But what does that solve? Such a water storage is only useful for peak loads during severe downpours; apart from that, it is useless.’ The municipality of Eindhoven decided to look at the aggregate climate taskings. ‘All the taskings – waterlogging, heat stress, and dehydration – benefit from more greenery to collect water, cool the environment, supplement groundwater, foster water evaporation, and attract more birds and insects. Greenery serves multiple purposes.’ The municipality thus included an incentive scheme in the calculation tool, in order to increase greenery volumes in private building developments.

The calculation tool and rewards for green choices

In the Eindhoven calculation tool, construction companies can enter roughly what they will be building, where, and when. The first step involves the selection of the neighbourhood in which they plan to build. The map shows which neighbourhoods are green and which lack greenery. Projects in greenery-deficient neighbourhoods qualify for additional rewards. If the construction company opts for a green water storage solution, the capacity requirements will be lower if such a solution is realised above ground.

For example: a developer is constructing a building with a roof surface of 1000 square metres in a greenery-deficient neighbourhood. If he opts for a traditional rooftop and subsoil water storage, the building must be capable of storing 75 cubic metres of water. However, things are different if the plans are based on a green design, e.g., featuring trees, wadis, green façades, and/or green rooftops. The most favourable green variant will not require the provision of additional water storage.

The construction company needs to add and elaborate the outcomes of the calculation tool when submitting its application for a building permit. The calculation tool went online in January 2019. With effect from that time, applications for environmental permits must specify the water storage capacity to be realised. Van Ekert has noticed a considerable increase in green rooftops as a result of the new policy and the calculation tool. ‘Before, only 1 in 10 larger building plans used to feature a green roof. Now, more than half do.’

The developments go beyond green rooftops. Van Ekert is also noticing an increased awareness of climate-proof construction. One building project, for example, had initially refrained from providing any water storage. ‘However, they were building at a low-lying location in the city, which was prone to frequent waterlogging,’ Van Ekert reports. ‘When we pointed this vulnerability out to them, they made every effort possible to green the building site by constructing trees, wadis, green façades, and green rooftops.’