The Amstel Gooi en Vecht (AGV) district water board is pursuing collaboration with societal and private parties in the region to implement climate adaptation measures and conduct a risk dialogue. Twynstra Gudde consultancy put the water authorities in touch with some 200 local parties and networks that are already or could be actively engaged in this field, such as schools and nature associations. Effective ways of collaboration with such parties were indicated for each network. A manual listing the networks and their commitment to adaptation has been presented to the district water board and the municipalities in the management district. In addition, five strategic and process-related recommendations have been formulated. Some municipalities have already embarked on the approach suggested.

Ensuring that areas are able to cope with severe downpours (waterlogging), heatwaves, periods of extreme drought, and urban flooding requires measures such as the retention, storage, and regulated drainage of rainwater; depaving surfaces; planting more greenery; and rendering vital functions water-resilient. Many such measures impact the design of private and municipal territory. The district water board is already collaborating with municipalities and now wants to involve societal and private parties as well. This calls for insight into local groups, organisations, and other networks that are interested in embracing climate adaptation.

The water authorities have commissioned Twynstra Gudde consultancy to explore their management area. By asking for information, perusing local newspapers, and browsing the Internet, some 200 networks have been identified that could be relevant to collaboration with regional and local governments in the field of climate adaptation. Examples include residents’ organisations and home owners’ associations that are also responsible for managing outdoor spaces, nature and allotment garden associations, business estate associations, farmers, horticulturists, village councils, and schools.

A practical manual as a result

This manual is important in the purview of setting up a risk dialogue to assess the risks of climate change in collaboration with local stakeholders. The manual provides a toolbox that helps municipal and water board staff to assume a more facilitative and collaborative role.

Lessons to be learned from the project

Based on the list of networks, five recommendations have been formulated for successful collaboration in climate adaptation efforts:

In order to place the collaboration on a firmer footing, setting down roles, responsibilities, and ambitions at the administrative level would be preferable.

Everyone holds different views on collaboration. Insufficient consideration of such views entails the risk of disappointment arising later on in the process, on account of differences in expectations. As a rule, organisations are involved in several coalitions: a group of people or organisations pursuing certain goals related to a particular tasking or opportunity. In such cooperatives, it is important to be explicit regarding who will take on which role in which situation. Roughly speaking, three different forms of coalition can be distinguished: 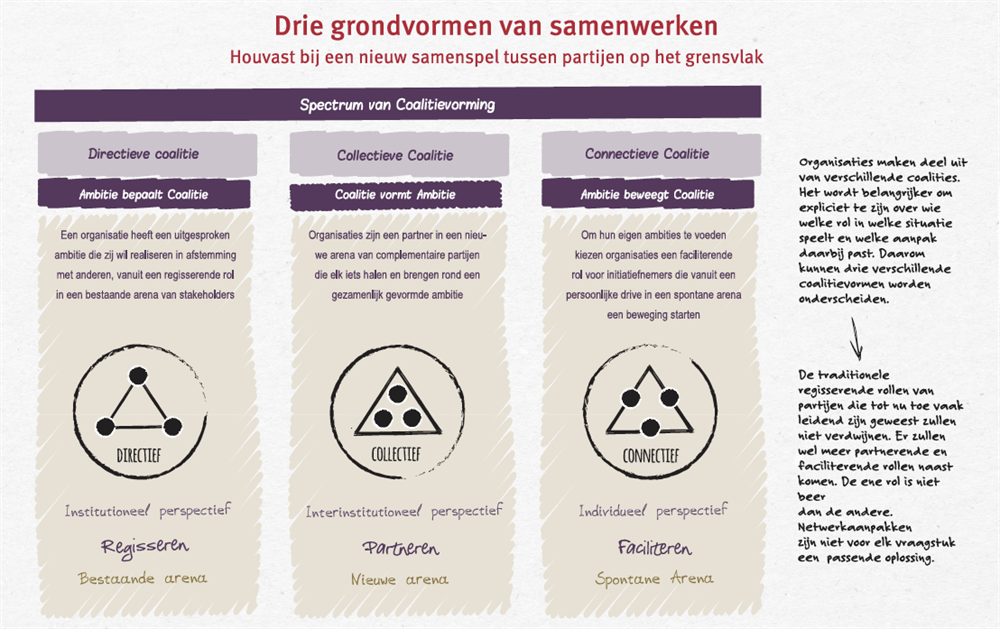 Each of the coalitions has pros and cons; none of the coalitions is better than the others. The key is to make well-considered choices and to be explicit regarding the goal. More information on forms of collaboration is provided in the model networking manual (pdf, 25 MB).

There is no blueprint for conducting a risk dialogue. It is up to the collaborating parties to reach consensus on the desired steps in the process, the planning, the efforts, and the ultimate result. It is advisable to set down the collective ambitions (at the administrative level) in, for example, a declaration of intent or collaboration agreement.

Few societal initiatives focus primarily on the issue of climate adaptation. However, initiatives are being launched in the fields of greening, biodiversity, and energy transition. Try to link climate adaptation to urban taskings involving a great deal of “energy” and which open up opportunities for using existing networks. This will induce the other relevant municipal departments to follow suit, such as parks and public gardens, spatial planning, and real estate. Eventually, climate adaptation must be integrated into new projects and plans.

More details regarding the five recommendations are provided on this website.