The Delta Decision on Spatial Adaptation has been incorporated in the Delta Programme since 2015 and is intended to render the Netherlands climate-proof and water-resilient. Spatial adaptation involves adapting the design of cities, villages, and rural areas to the impact of climate change. A high-quality living environment is a precondition for an attractive business climate, well-functioning cities, and a robust countryside. Urban flooding and an increasing risk of heat stress, drought, and severe downpours pose a threat to such values.

An example of spatial adaptation in an urban environment is adding greenery. More greenery reduces the risk of waterlogging and can help to reduce extreme heat during summer. An example of spatial adaptation in rural areas is re-meandering streams. This measure combats drought in upstream areas and can contain waterlogging in downstream areas. A climate-proof and water-resilient design for vital and vulnerable functions, such as pumping stations, emergency services, and hospitals will reduce the risk of large groups of victims and major economic damage.

In addition to resolving problems, spatial adaptations also open up opportunities. For example, creating more room for water and greenery in cities will enhance spatial quality and boost real estate values. Furthermore, many adaptation measures can be combined with other sustainability pursuits, such as promoting biodiversity or a healthy living environment. Also, factoring in climate conditions at an early stage of spatial planning and the management and maintenance of areas and objects will save a great deal of money.

Which adaptation will be effective at what location depends on the local vulnerability to climate effects. Such vulnerability can be mapped out by means of a stress test. Local parties will need to join forces to set down and implement potential adaptations. The key issue is that spatial planning activities must – as a matter of course – factor in the future climate. In many cases, this can be achieved through relatively simple adjustments in renovation or development projects that have already been scheduled. Securing general acceptance of spatial adaptation will require planning principles and design criteria to be adapted to the “new climate”, and adaptation goals to be embedded in policy. The national government, the provinces, the district water boards, and the municipalities have agreed to have spatial adaptation embedded in policy by no later than 2020. The governments have formulated seven ambitions in the Delta Plan on Spatial Adaptation. These ambitions need to ensure that adaptation gets off the ground. Together with the efforts to be expended by private parties and residents, this must render the Netherlands climate-proof and water-resilient by 2050. 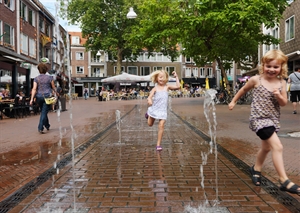