The serious game has a website structure and comprises two sections:

For whom is this game intended?

This game is intended for all the organisations that wish to green their schoolyards and involve children in the design process. Such organisations may be government bodies, such as provinces, district water boards or municipalities; they could also be school boards, real estate developers, landscaping companies, or (landscape) designers.

Go the the game. 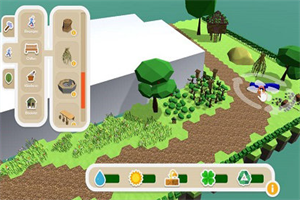